On Christmas Day in the Morning

At our members meeting August 12th at 6:00pm in the dining room of the Pella Community Center, all members attending will have the opportunity to vote for nominees to our Board of Directors. You must be a current member with paid membership fee to vote. You may pay at the meeting. Below is the list of folks running for the various positions on the Board along with a brief statement.

President (will vote for 1):

I have been a member of Union Street Players since 2011 and have served in a number of capacities, including serving on the board.  I hold a Masters degree in Healthcare Administration from Purdue University.  I have served as the Iowa State President of the American Association of Medical Assistants and am currently on the National Task Force for the association.  I do not look at the office of President as a position of power, but rather, as the conduit by which we can join our strengths and abilities in a unified force to create high quality shows and serve as a resource for theatrical events in our community.  There are many ways in which we can use our skills and we always want to treasure our past, as well as use the most current technologies to create both theatrical magic and thought-provoking messages.

Vice President (will vote for 1):

Deb Linn has been involved with USP since 1997 both onstage and behind the scenes. Over those years she has been cast in at least 17 roles, worked in nearly every position in a production from set construction and make-up through Producer and Director. She has been a USP Board Member for at least 10 years and was our 2011 Walk of Fame inductee.

Sara Collins performed in her first show with USP in 2003, but has been consistently involved for the past nine years. She has been cast in at least 11 roles and has also worked as a stage manager, make-up designer, and part of a set crew. Outside of theatre Sara works at The Funky Zebra in Pella, and as committee member and marketing consultant for Appanoose Ministries.

Secretary (will vote for 1):

Lynn Cutler has been involved in several USP shows over the past 4 years. She currently manages the ticketing for USP shows and is a director of USP’s summer Drama Camp program. She lives in Pella with her husband Doug, a teacher at Pella High, and assorted children.

Treasurer (will vote for 1):

Jim Palmer has been involved with USP production since 2004 and has served as the Treasurer for the USP Board of directors for the past 2 years.  Jim is the practice manager for Epiphany Dermatology in Pella Iowa.

Lynn started with USP in the production of Joseph and the Amazing Technicolor Dreamcoat. Since then she has performed in Kiss Me, Kate, Stage, and Beauty and the Beast. She is a retired RN and currently the Music Director at St. Mary’s Church. “I love being part of USP. The creativity and talent in Pella and the surrounding area is amazing!”

Doug has been involved with USP since 2006. Has played 37 different characters in numerous performances since 2006, has been an “At-Large” Board Member for approximately 11 years, and was our 2017 Walk of Fame inductee.

I have been a strong supporter of USP for many years as well performed in the 2018 version of 12 Angry Men.  I have previous board experience with the Newton Community Theatre where I served for 7 years.  This time included terms as Vice President and President.

I have been involved with USP for two productions helping out with set, selling tickets, and ushering for the productions of The Little Mermaid and Beauty and the Beast. I also helped backstage getting Ariel and Belle into their costumes. I was involved with band and theater throughout high school in Texas. I have a passion for the arts and really believe a good community theatre group can have a positive impact on the community.

Arlyn started with USP in the 2016 production of The Christmas Post. Since then he has performed in The Wizard of Oz, It’s a Wonderful Life; Kiss Me, Kate, The Little Mermaid, and Beauty and the Beast. Arlyn is retired from Pella Corporation yet active in volunteering at the Pella Historical Society, and Quiet Waters Ministries in Colorado among other church activities.

I became involved in USP five years ago as a parent; I love USP and have a passion for all of the behind the scenes parts of a production.  Every Saturday I get to imagine what shows could come from the beautiful clothes while helping others at the costume shop. Costuming “It’s a Wonderful Life” let me put all that magic to work and since then I have been able to assist with lights and sound for other productions. I teach students to use technology responsibly as a Google Educator, which gives me a plethora of experience working with databases and social media. This experience can help planning and organizing for our wonderful USP organization.

Union Street Players is looking for nominees to be members of our Board of Directors starting September 1st! Please send an email to usppresident@gmail.com to let us know what position you would be interested in running for by August 5th. At our August 12th membership meeting in room 206 of the Pella Community Center, we will vote to fill the positions of President, Vice-president, Secretary, Treasurer, and three “at-large” positions.

Description of duties is below. Should you have any questions, please contact us at usppresident@gmail.com.

At large members will typically serve as Chair of one of our committees such as Production Committee, Events and Marketing Committee, Front of House Committee, Set and Materials Committee, Costume Shop Committee, Financial Committee, Technical Committee, Back Stage and Green Room Manager. The Chair is simply the point person for all that concerns their particular committee including recruiting members to their committee. Assignment of Chairs is done by the President based on the skills, abilities and best intentions of the members and volunteers in the organization.

From the Director and Producer of Union Street Players’ production of Disney’s Beauty and the Beast:

Congratulations to all and many thanks to those who auditioned for “Stage” and those who helped with auditions! The cast list is as follows: 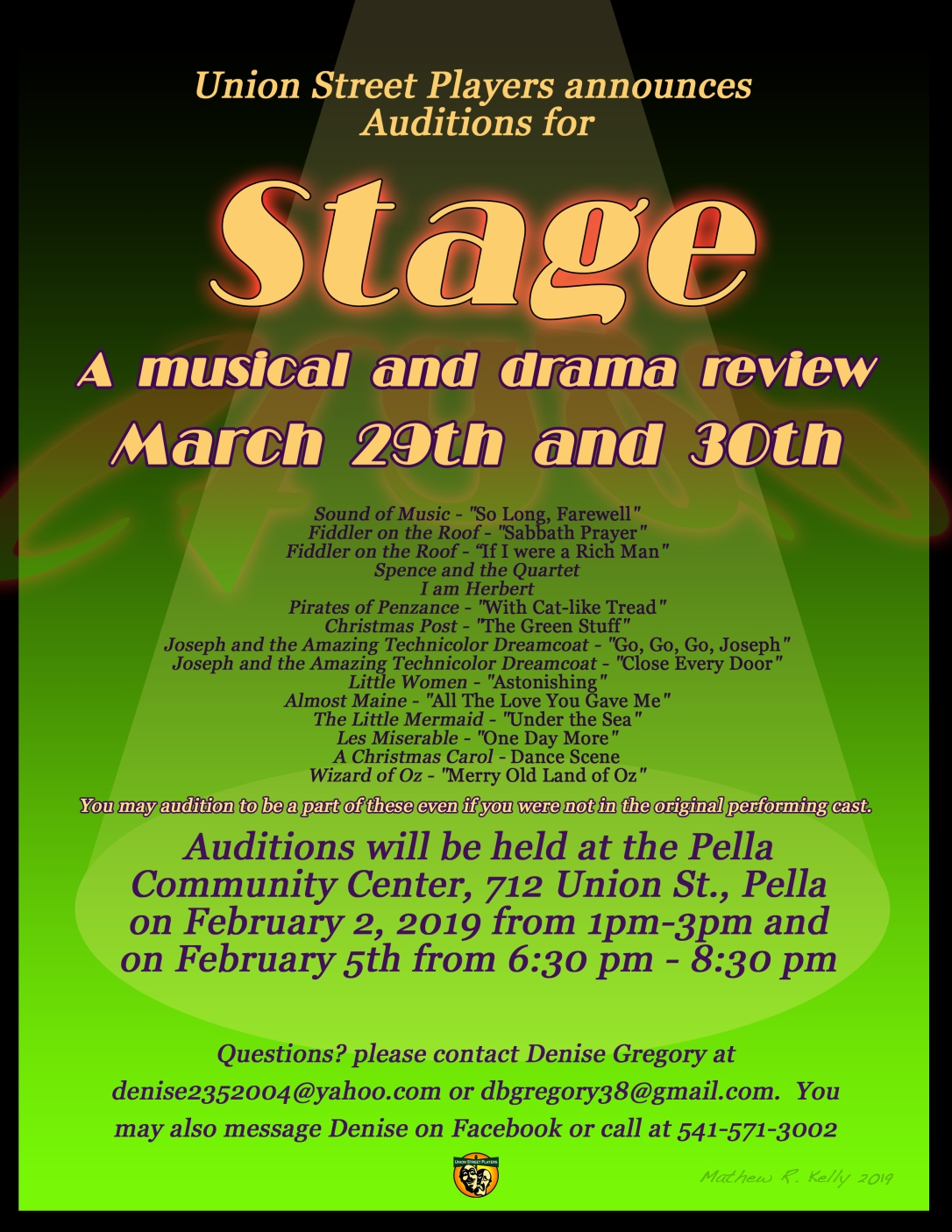