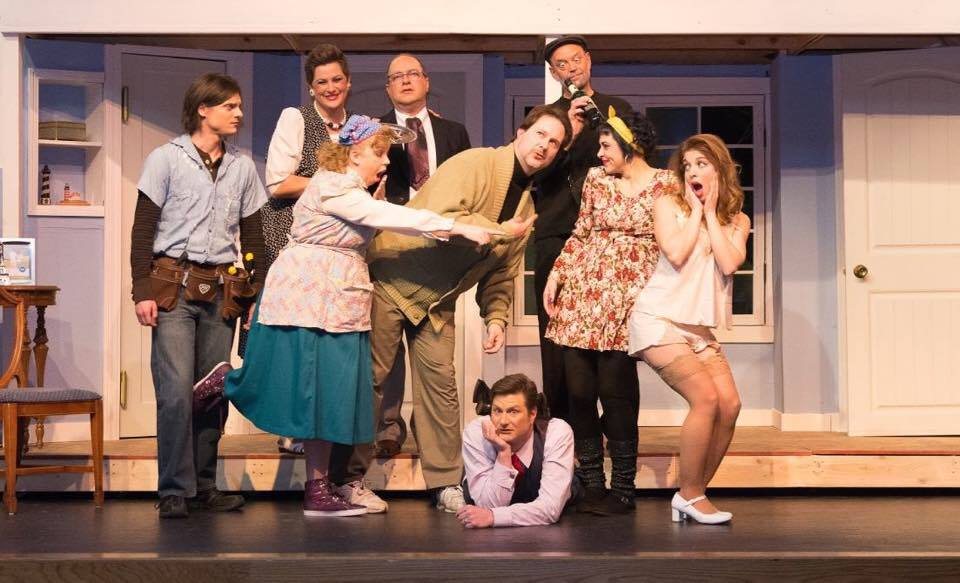 The Joan Kuyper Farver Auditorium in the Pella Community Center was alive with laughter this past weekend as Union Street Players (USP) kicked off 2017’s season with the raucous British comedy Noises Off! It was a fitting tribute to the auditorium’s namesake and long time benefactor who passed away during the show’s production.

USP Director Denise Gregory (Bye Bye Birdie) made the most of a stellar cast that included USP’s newest inductee to the USP Walk-of-Fame, Spence Ver Meer. It also included Lonnie Appleby who earned outstanding actor honors from the Iowa Community Theatre Association (ICTA) in USP’s Charles Dickens Presents A Christmas Carol and Jana De Zwarte (aka Java DeZwante) who earned ICTA outstanding actress honors for her role as Miss Hannigan in Annie. The rest of the talented cast were all veterans of USP productions which helped with the incredibly difficult blocking, action, and timing required to pull off the show.

Audiences were equally impressed with the show’s complex set. The two-story set had to be designed so that it could be rotated during intermissions between acts. Designed by Jim Palmer and constructed by USP’s amazing set crew, the set allowed audiences to see the show-within-a-show from both audience and backstage perspectives.

Spring shows have historically been USP’s smaller productions. It is an opportunity for USP to try lesser known, original, or avant garde plays. These productions afford cast and crew the opportunity to stretch themselves, and the audiences get a chance to stretch their stage experience, as well. Attendance for spring shows averages between 350-400 audience members. Noises Off! enjoyed good word of mouth and above average attendance:

Next up for USP: The Wizard of Oz

Director Denise Gregory is pleased to announce her cast and crew for Union Street Players’ Spring production of the comedy Noises Off! Show dates are March 30 – April 2.